Forms of Exile in Jewish Literature and Thought

Forms of Exile in Jewish Literature and Thought deals with the concept of exile on many levels – from the literal to the metaphorical. It combines analyses of predominantly Jewish authors of Central Europe of the twentieth century who are not usually connected, including Kafka, Kraus, Levi, Lustig, Wiesel and Frankl. It follows the typical routes that exiled writers took, from East to West and later as far as America. The concept and forms of exile are analysed from many different points of view and great importance is devoted especially to the forms of inner exile. In Forms of Exile in Jewish Literature and Thought, Bronislava Volková, an exile herself and thus intimately familiar with the topic through her own experience, develops a unique typology of exile that will enrich the field of intellectual and literary history of twentieth-century Europe and America.

The book was selected by the of Knowledge Unlatched Selection Committee 2020 (comprised of specialist subject librarians from all over the world) to be part of the “KU Select Books Collection 2020, Humanities and Social Science” as one of 343 titles worldwide selected for Open Access release.

The publication of the book was possible thanks to a grant from the Robert A. and Sandra S. Borns Jewish Studies Program at Indiana University, Bloomington.

“Bronislava Volková’s book is an unusual and thought-provoking project on the topic of exile, which delves into issues of human conditions (including extreme ones), states of mind and forms of revolt and ostracism. It also pursues the reasons that created the sick societies of the twentieth century. It shows exile’s capacity to transform one’s consciousness, come back to oneself and find true freedom and community in a wider sense of the word. These ideas are exemplified on outstanding Jewish writers and thinkers originating from a broad geographical area from Ukraine all the way to France. The study further points out the neglected and undervalued fact that the majority have found a refuge and realizalion in America.”
Markéta Goetz-Stankiewicz, Professor Emerita, Department of Germanic Studies, University of British Columbia, Vancouver

“A true tour de force of scholarship, close and nuanced reading of o broad range of major European authors and public figures including some who defined modernity with its complexities and discontents. Bronislava Volková’s book both offers an in-depth analysis and an engaging synthesis of the pervasive twentieth century experience, condition, and trauma of exile. These most prominently entail identity challenges and imaginative ways to explore alienation, fear of deracination, and anxiety of identity and creativity loss. This fascinating new book convincingly proves how those fears and anxieties led to some of the most remarkable and consequential masterpieces of twentieth century creativity.”
Dov-Ber Kerler, Cohn Chair of Yiddish Studies and Professor of Jewish and Germanic Studies, Indiana University, Bloomington

“Few scholars have the knowledge of exile in all of its intricate dimensions that Bronislava Volková exhibits so clearly and concisely in the pages of this book. Living for most of her life away from her native country and culture, she has found a home in literature, especially that of exiled Central European Jewish authors. For anyone interested in learning more about these writers and the transformative effect of territorial displacement, cultural dispossession, and internal exile, this book will serve as a masterful guide.”
Alvin Rosenfeld, Professor of English and Jewish Studies and Director of Institute for the Study of Contemporary Antisemitism, Indiana University, Bloomington 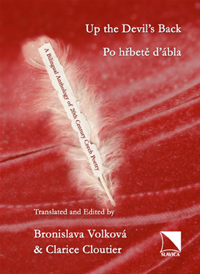 Up the Devil’s Back / Po hřbetě d’ábla: A Bilingual Anthology of 20th Century Czech Poetry

presents 65 selected Czech poets in English translation, together with their biographies. Co-translated and co-edited by Bronislava Volková (Professor of Czech literature, Comparative literature and Jewish studies at Indiana University) and Clarice Cloutier (Assistant Professor of Central European literature and culture at New York University [Prague campus] and Lecturer at Charles University, Prague). The anthology features well-known poets alongside those who have not received well-deserved attention, female poets alongside males and exile poets alongside those who remained in Czechoslovakia under totalitarian regime. With Introduction by authors and Afterward by Alfred Thomas.

“These poems are more than an expression of a series of individual talents: above all they bear witness to a culture whose survival in the calamitous twentieth century is nothing less than a miracle. The same might be said of the publication of this anthology.”
From the Afterword by Alfred Thomas, University of Illinois, Chicago

“To be frank, it takes an enormous deal of personal courage to undertake a project such as either history or anthology of one’s own literature. Bronislava Volková and Clarice Cloutier took a look at the Czech poetry today, set up limits, and created thirteen categories: Beginning with the middle of nineteenth century Czech poet Antonín Sova (1864-1928), they scanned the highlights of different phases of modern Czech poetry developments and went to work, thus opening the riches, and the marvels, of contemporary Czech poetry to any Czech or English-speaking interested reader all the way to contemporary Martin Reiner (born 1964)… this Slavica volume is a veritable walk through a garden of delights.”

“Up the Devil’s Back, a bilingual anthology of 20th-century Czech poetry just hitting Prague bookstore shelves, is one of the more successful recent examples of such attempts at being definitive….. the monumental task of selecting and translating the work of 65 Czech poets and giving such eclectic diversity a sense of unity.”

From the announcement by Stephan Delbos, Prague Post, Dec 9, 2009

This anthology, containing 168 poems by 65 twentieth-century poets, most of which appear here in English for the first time, is absolutely indispensable for students and teachers of Czech literature and culture. It is also an enjoyable reading for anyone interested in poetry in general, or preparing for a trip to Prague. …Volková and Cloutier deserve praise for accomplishing the admirable feat of compiling the most complete poetry anthology ever published in English. It is more objective and reliable than its outdated predecessors.”

From the review by Kirsten Lodge, Columbia University, SEEJ 2010

This study presents alternative views on major works and authors of Czech and Central European literature in a feminist and non-elitist perspective. It examines the cultural biases expressed in selected major works and the underlying (subconscious) values of their authors. Using a semiotic approach, it gives detailed attention to the hidden emotive meaning of the texts. Themes include authors’ attitudes to relationships between women and men, the images of women in both older and contemporary Czech literature, nationalistic biases, issues of responsibility, active versus passive approach to life, new visions added to European culture by Czech authors like J.A. Comenius, K.H. Mácha, B. Němcová, J. Hašek, K Čapek, O. Březina, J. Seifert, B. Hrabal, M. Kundera, L. Vaculík and others.

“…the work of a mature versatile scholar… The selection of topics and the structuring of this manuscript reflect the variety of her intellectual concerns as well as a personal, often bold, insight into Czech culture. While her semiotic approach to the literary text is in the great tradition of the Prague Linguistic Circle, her feminist angle brings in a much needed new perspective… At a time when Czech culture and literature are receiving a richly deserved, if unprecedented attention in American Universities, Volkova’s manuscript fills a large gap. It brings together a wealth of knowledge and insight within a format shaped by an original sensibility. By blending her reflections on broad cultural themes with detailed, sophisticated readings of the original texts, Volkova has written a book that will prove as valuable to the undergraduate as to the most advanced students of Czech culture.”

“…Discusses well-known works with the fresh, level-headed approach of a contemporary highly intelligent woman scholar whose argument is incisive, but never restricted or burdened by humorless ideological feminism… different scholarly analytical tools – those of semiotics, emotive signs and semantics – not only show Dr. Volkova’s close familiarity with these aspects of literary criticism, but also deepen the reader’s perception of  an important aspect of Czech literature and culture: its  lyrical quality… Particularly for students of the lyric these chapters are bound to be of major interest, for others they reveal  another significant aspect of Czech literature. …The carefully prepared bibliography at the end of the study is very useful indeed… renders a most valuable service not only to students and scholars of Czech and Central European literatures and culture, but also to comparatists, historians of ideas as well as the general intelligent reader.” 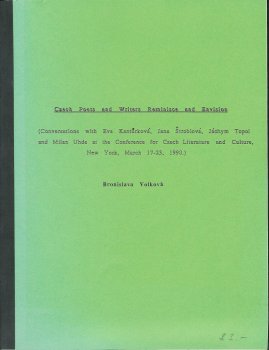 Interviews with four prominent Czech writers and poets (Eva Kantůrková, Jana Štroblová, Milan Uhde and Jáchym Topol) at the Conference for Czech Literature in New York, March of 1990 on the occasion of the Velvet Revolution. 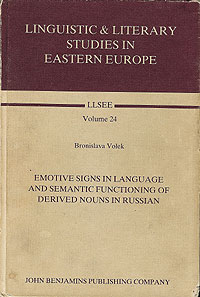 This theory of emotivity is based on the notion of language as a superstructure of heterogeneous subsystems which are linked in various ways in each individual use of a linguistic item and create a unique hierarchical “surface” structure from it. This conception of language as a superstructure of heterogeneous subsystems emerges from the structuralist-functional approach of the Prague School.…”It is evident that Volek has produced a valuable, thought-provoking, and skillfully-executed piece of work which represents real progress in the investigation of its subject matter. Her analysis of emotive signs provides a much clearer picture than heretofore available of their semantic structure because it considers the contribution to their meaning of lexical morphemes as well as grammatical. Her discussion of semantic and pragmatic context is especially useful in revealing the enormous potential of emotive signs in particular and the linguistic sign in general.”Mark J. Elson, University of Virginia, Slavic and East European Journal, 1990, No. 2 …”That ‘emotive’ and ‘evaluative’ are two different things is especially stressed by Volek. Her book Emotive Signs in Language (1987) represents by far the best publication on the topic of emotivity and lexicon”.